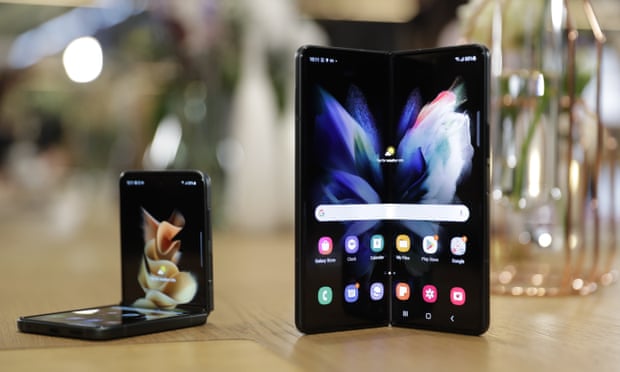 TechScape: Are folding phones the shape of things to come? - The Guardian

What will your next phone look like? Will it be a featureless black rectangle from the front, with a bulbous many-lensed camera unit emerging from the rear? Or will it be … different?

Samsung is one of a growing number of companies betting that now is time for a change. The company’s latest phones, the Galaxy Flip 3 and Galaxy Fold 3, aren’t going to be mistaken for an iPhone at a distance: both are built, in different ways, around a flexible screen, with a hinge that bisects the whole device and fundamentally changes how it works.

Of the two, the Fold 3 is more traditional. When the phone is in its folded state, it looks like a normal – albeit extremely thick – smartphone, with a screen on one side and a big camera on the other. But unfold it like a book, and it becomes a device closer in size to an iPad mini, a tablet form factor beloved by its users but curiously abandoned by Apple over the past few years in favour of the chunkier (and more expensive) full-size models.

For me, it’s hard to love. I was never a fan of the iPad mini, which felt awkwardly neither small enough to be particularly portable nor large enough to be a significant improvement on a phone, and the Fold feels in-hand like a compromise on a compromise, neither collapsing small enough to feel as good as a smartphone nor expanding well enough to completely do its job as a tablet.

But the Flip 3 is a different story. Unfolded, the phone is fairly traditional if a bit on the large side. But fold it in half vertically, and it becomes a perfect square, about the size of a well-filled wallet, and compact enough to fit in a pocket. A miniature screen on the outside serves to show basic notifications, and enable a simple selfie mode you can use without even opening it up.

The two phones have a bevy of software features to take advantage of their foldability, from using the rear screen to show a preview of a photo to its subject to letting the device stay half open and chucking, say, playback controls on the bottom half and a video on the top. But those are icing on the cake: the success, or failure, of the concept hinges (sorry) on whether a folding phone is actually something you want.

Samsung, of course, hope it is. At the launch of the two devices, I spoke to Conor Pierce, who leads its mobile division in the UK and Ireland. His goal for the future is to change how we talk about smartphones – and ideally, to shift it away from a world of Apple v the rest. “What we want to try to do is maybe disrupt and change the game when it comes to an OS conversation,” Pierce said. “When you walk into a store, ‘do you want a folding phone or do you want a flat phone’ should be the first question you’re asked.

“The future is folding, it’s only a matter of time. I’ve been through this for decades, I know it’s inevitable that folding will become the de-facto form factor for these devices.”

Pierce may be right that the future is folding, but the campaign for Samsung is to convince people that the present is, too. Folding phones are a couple of years old, now, and yet they’re still a novelty on the street. And that’s despite generally good reviews. Our consumer technology editor, Samuel Gibbs, had nothing but good things to say about the previous generation of the Galaxy Fold, for instance:

The Galaxy Z Fold 2 is an absolute triumph for Samsung, cementing foldable screen devices as not only a possible novelty but as an actually good, useful device worth buying right now.

The Z Fold 2 is exciting, useful in ways you may not expect and proves that the future of smartphones, tablets and computers is one unified adaptable device. One day relatively soon folding screen devices will be mainstream and we need devices like the Z Fold 2 to make that happen.

That’s good because the Flip and Fold 3 do not completely erase their other major weak spot: the hinge itself. The devices have come a long way since folding phones first arrived on the scene, but it’s still hard to forget that the phone has a big crease down the middle where it folds in half. You can feel it as you swipe up and down the screen, you can see it if you hold the phone at an angle, and if you’re the sort to let yourself get annoyed by it, it will almost certainly drive you mad.

What interests me more than the question of whether or not you should get the Flip 3 as your next phone, is the conditions that led to its creation. Because I have a feeling that the next few years of tech are going to see a flourishing of this sort of novel design approach.

The narrow explanation, of course, is the availability of technology to make flexible displays, and sure, that’s a big part of it. Flexible screens have been an answer in search of a question for a while now, and foldable phones are certainly a more compelling use case than LG’s rollable TV (priced at “if you have to ask, you can’t afford”).

But a bigger part, I think, is that, even as phones continue to grow in their importance to our everyday lives, we’re seeing diminishing returns on the old drivers of upgrades. More megapixels won’t do much to improve the quality of your pictures, a faster CPU isn’t meaningfully relevant if all you do is browse social media and send messages, and screen size, camera lenses and battery capacity all come with trade-offs if they’re improved any further.

Even if there are diminishing returns to marginal improvements, though, we all seem happier than ever to spend big sums on the devices in our pockets. Officially, any phone over £600 is “premium”, and the UK is the most premium-focused market in Europe, Samsung’s Pierce says, with about 78% of the market above that price-point – so much so that the “ultra-premium” sector, over £1,000, is 37% of the market in its own right.

Those facts, in turn, have pushed device manufacturers to find other ways of improving the offering. One of the most hopeful outcomes, for me, is that the Flip and Fold are emphatically not for everybody. A world where the concept of a “flagship phone” dies away, and we accept that, even at the expensive end of the scale, everyone’s needs are different and the device that is best for them might not be the one that is best for someone else, would be the sort of consumer electronics future I’d like to see.

If you want to read the complete version of this newsletter please subscribe to receive TechScape in your inbox every Wednesday.

… as you’re joining us today from France, we have a small favour to ask. Tens of millions have placed their trust in the Guardian’s high-impact journalism since we started publishing 200 years ago, turning to us in moments of crisis, uncertainty, solidarity and hope. More than 1.5 million readers, from 180 countries, have recently taken the step to support us financially – keeping us open to all, and fiercely independent.

With no shareholders or billionaire owner, we can set our own agenda and provide trustworthy journalism that’s free from commercial and political influence, offering a counterweight to the spread of misinformation. When it’s never mattered more, we can investigate and challenge without fear or favour.

Unlike many others, Guardian journalism is available for everyone to read, regardless of what they can afford to pay. We do this because we believe in information equality. Greater numbers of people can keep track of global events, understand their impact on people and communities, and become inspired to take meaningful action.

We aim to offer readers a comprehensive, international perspective on critical events shaping our world – from the Black Lives Matter movement, to the new American administration, Brexit, and the world's slow emergence from a global pandemic. We are committed to upholding our reputation for urgent, powerful reporting on the climate emergency, and made the decision to reject advertising from fossil fuel companies, divest from the oil and gas industries, and set a course to achieve net zero emissions by 2030.

If there were ever a time to join us, it is now. Every contribution, however big or small, powers our journalism and sustains our future. Support the Guardian from as little as €1 – it only takes a minute. If you can, please consider supporting us with a regular amount each month. Thank you.